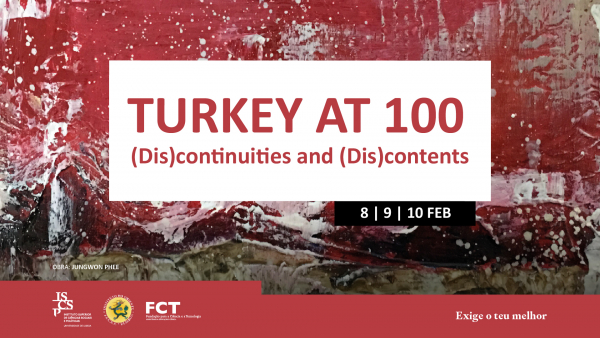 TURKEY AT 100: (DIS)CONTINUITIES AND (DIS)CONTENTS

At 100, the Turkish Republic is in a flux that is consequential for global affairs. From Atatürk’s laicism to Recep Tayyip Erdogan’s Yeni Türkiye [new Türkiye], the republic has gone through a dynamic series of changes that impacted its social, cultural, political and economic fabric. Emerged during the devastating aftermath of the Great War, the Republic has been a regional stage for competing nationalisms, domestic and international migrations and forced population movements, a critical arena of the Cold War politics, an economic and financial showcase for several phases of bust and boom, a vibrant civil society coupled with periods of coups and repression, pulsating democratic participation that coincide with stifling deep-state politics, and accompanying cultural complexities. Capturing such dynamism of this republic that bridges Middle East and Europe, calls for multi-layered evaluation of ideas and practices such as Republicanism, Democracy and Modernity in action, as well as interdisciplinary debates on the shifting undercurrents of the 21st century in terms of globalization, rise of authoritarianism, impact of climate change and episodes of massive resistance. To serve this end, the Institute of Social and Political Sciences (University of Lisbon, Portugal) is organising an international conference seeking to address the changes during the past 100 years in Turkey and future trajectories for the country.

This conference is the third in a series that began in 2014 with a very productive discussion on the Gezi Park protests that culminated in the publication of an edited volume (‘Everywhere Taksim’: Sowing the Seeds for a New Turkey at Gezi), followed by another in 2017, which led to the publication of two special issues, one in Mediterranean Quarterly and another in Turkish Studies in 2018.

We invite submissions on the following and related topics:

- Securitization and authoritarianism of the AKP rule

- Debates on the presidential system vs. the parliamentary system

- Issues of international and domestic migration

- Art and creativity as resistance practices

If you are interested in participating, please send a 500-word abstract to Dr. Isabel David (isabela_davidova@yahoo.com and isabel.david@iscsp.ulisboa.pt) and Dr. Kumru F. Toktamış (kumru@pratt.edu ) by September 10, 2022. We acknowledge receipt of all emails and will reply to all. If you do not receive a reply, please resend your abstract. Please include the following in your email:

Acceptance notices will be sent by late September, 2022.

In case your abstract is accepted, a draft paper of around 8000 words is due two weeks prior to the beginning of the conference. We intend to compile an edited volume with the best papers to be published in the recently launched “Culture, Society and Political Economy in Turkey” book series with Peter Lang Academic Publishers, edited by Dr. Isabel David and Dr. Kumru F. Toktamis.

There is no fee for this conference. Please note that we are unable to provide any financial help to participants. 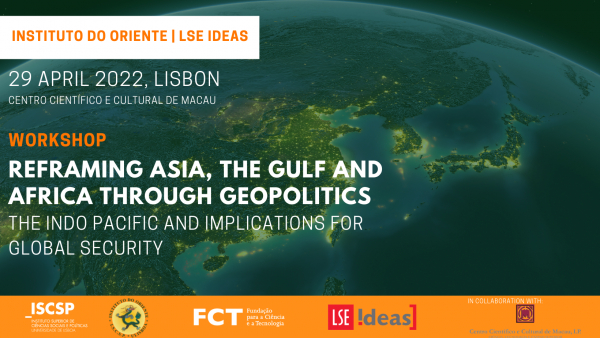 Instituto do Oriente of the Institute of Social and Political Sciences and LSE IDEAS from the The London School of Economics organized the Workshop “Reframing Asia, the Gulf and Africa through Geopolitics: the Indo Pacific and implications for global security”, that took place on 29th April 2022 at Centro Científico e Cultural de Macau (Lisbon). 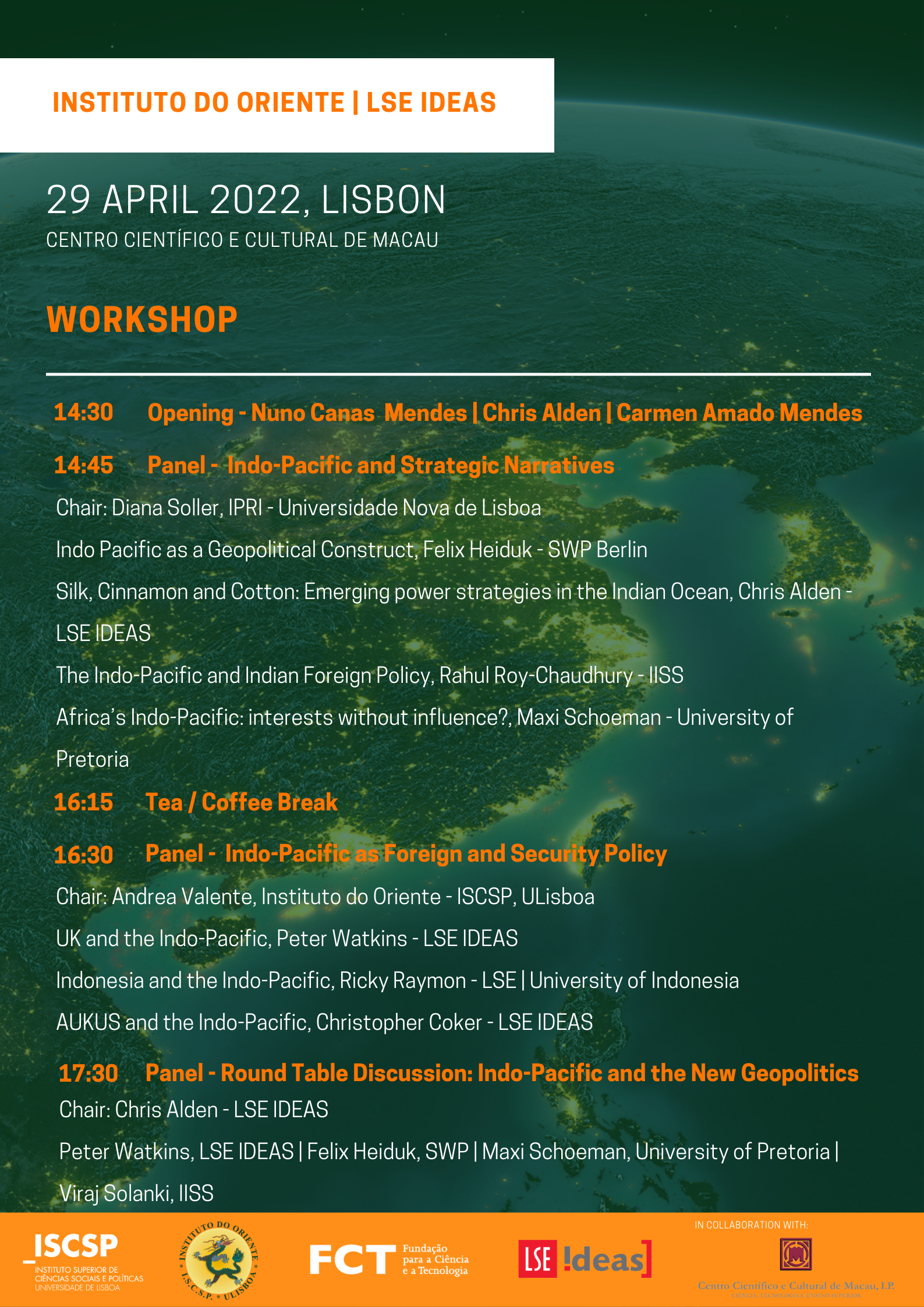 Iraq and the Middle East Geopolitics: New Trends and Dynamics

The Instituto do Oriente organizes, on October 7, 2021, at 5 pm, a lecture entitled…

Iraq and the Middle East Geopolitics: New Trends and Dynamics

The Instituto do Oriente organizes, on October 7, 2021, at 5 pm, a lecture entitled “Iraq and the Middle East Geopolitics: New Trends and Dynamics”.

The speakers of this lecture will be H.I. Saywan Barzani, Ambassador of the Republic of Iraq in Lisbon and Dr. Vasco da Cruz Amador, Founder and CEO of Global Intelligence Insight. Professor Teresa de Almeida e Silva, Coordinator of the UC of International Relations at ISCSP and Vice President of Instituto do Oriente will moderate the lecture. 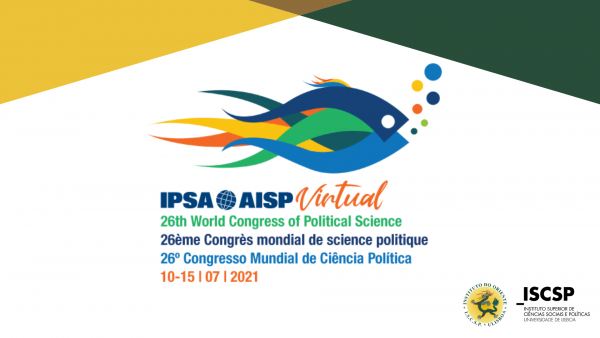 Panels Submitted and Accepted to the Congress:

Panel: “ Contemporary Nationalism, Populism and its Reflections on Foreign Policy: A Blueprint for Near East, Central Asia and Southeast Asia”

OI Researchers Participation in the Congress:

Panel: “Russia, Eurasia and the Crisis of the Liberal Order”

Panel: "Post-Erdogan Imaginaries: Continuity and Change in Turkish Society, Culture and Politics in the 21st Century"

Panel: "The Political Implications of Unwanted and Return Migration"

Papergiver/ Co-Author: Isabel David "The “Return” of Turkish Sephardic Jews to Portugal: Exit without a Voice" 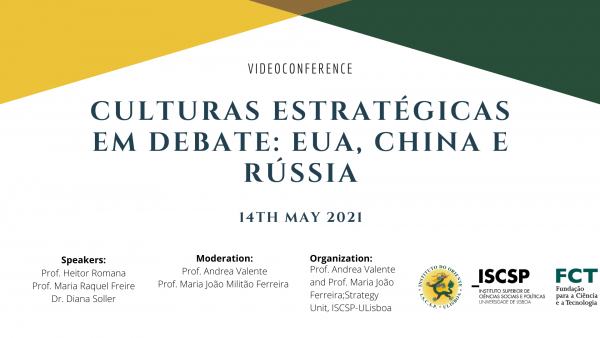 In partnership with the Scientific and Pedagogical Strategy Coordination Unit (ISCSP/UL), the Instituto do Oriente…

In partnership with the Scientific and Pedagogical Strategy Coordination Unit (ISCSP/UL), the Instituto do Oriente organized the Webinar on "Strategic Cultures in Debate: USA, China and Russia". This event took place on May 14th at 6 pm, via ZOOM. It was attended by Professor Heitor Romana, Professor Maria Raquel Freire and Professor Diana Soller, moderated by Professor Andrea Valente and Professor Maria João Militão Ferreira. 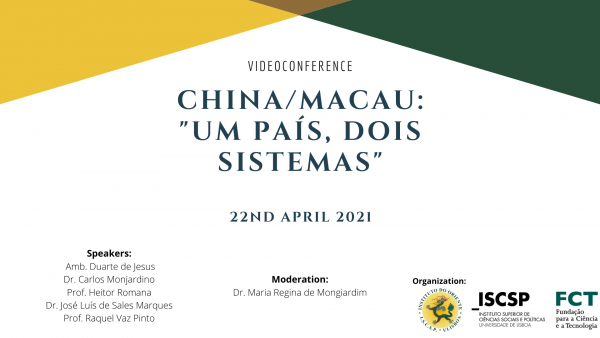 More than two decades after the creation of the Special Autonomous Region of Macao, and…

More than two decades after the creation of the Special Autonomous Region of Macao, and against the backdrop of the major economic and political changes that have taken place in the People's Republic of China since then, a reflection on the evolution and perspectives of the formula “ One country, two systems” in Macao seemed timely. For this reason, the Orient Institute organized the videoconference 'CHINA/MACAO: "ONE COUNTRY, TWO SYSTEMS", which took place on April 22, 2021, between 17:00 and 18:30 (GMT). The speakers of this conference were Ambassador Duarte de Jesus, Dr. Carlos Monjardino, Prof. Heitor Romana, Dr. José Luís de Sales Marques and Prof. Raquel Vaz-Pinto.
The Webinar is available on the Instituto do Oriente's Youtube channel: https://youtu.be/nojRfY8Tsrk 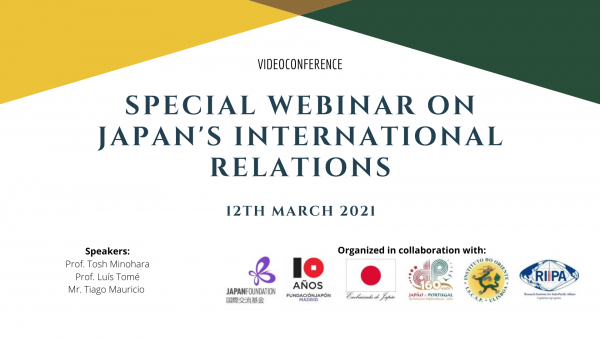 As part of the celebrations of the 160th anniversary of the Peace, Friendship and Commerce…

As part of the celebrations of the 160th anniversary of the Peace, Friendship and Commerce Treaty between Japan and Portugal, a webinar was held in collaboration with the Japan Foundation of Madrid, the Japanese Embassy, the Research Institute of Indo-Pacific Affairs (RIIPA) and the Orient Institute. The topics covered ranged from the relations between the two countries to Japan's role in international relations.

The webinar is available on the Japan Foundation's Youtube channel: https://www.youtube.com/watch?v=bkj3zQCSrBs 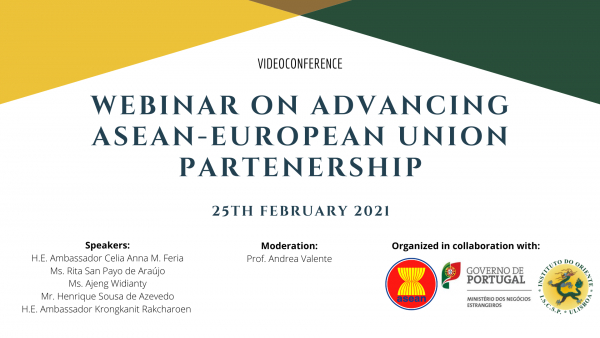 Under the Portuguese Presidency of the Council of the European Union (EU), and pointing out…

Under the Portuguese Presidency of the Council of the European Union (EU), and pointing out more than four decades of dialogue between the EU and ASEAN, the Orient Institute, the ASEAN Commission in Lisbon and the Ministry of Foreign Affairs of Portugal held a webinar on the advancement of the ASEAN-EU partnership.

The "Webinar on Advancing ASEAN-European Union Partenership" is available on the Instituto do Oriente's Youtube channel: https://www.youtube.com/watch?v=ddEqhYPa9Og&t=11s